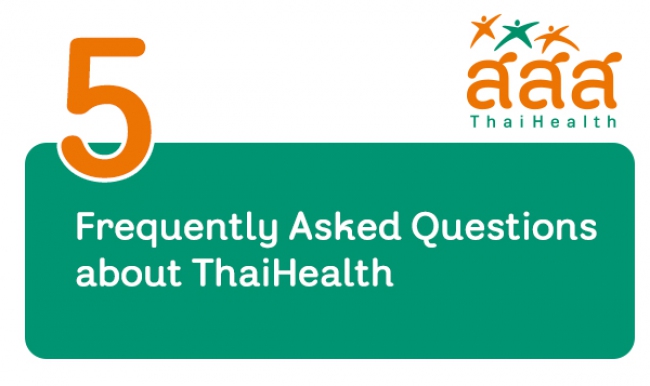 1. Role of ThaiHealth in the promotion of Thai people’s good health

ThaiHealth was established in 2001 in accordance with Health Promotion Foundation Act, which was a derivation of Australian government’s success health promotion effort. As of now, the organisation with more or less the same role exist in 12 countries worldwide.

ThaiHealth, after 10 years along the path, has welcomed several delegations of inspectors and auditors – experts from the World Health Organisation, experts from the World Bank, health promotion expert from private development organisation (Rockefellers Foundation). These visiting inspectors have found that ThaiHealth was a model organisation for health promotion with perceptible and widely recognised results.


Scope of Work of ThaiHealth

With challenging missions and different frameworks from those of government agencies, ThaiHealth is designed to be small and flexible, with low burden of operational cost so that the budget given can get through to the working groups in local communities efficiently. (At present, ThaiHealth employs 120 permanent members of staff, using only 5% of the budget for operational cost, and 2% for staff cost)

Known that working with health problems takes time, continuity, and should not be interfered by the politics or businesses that are prone to losses, the source of income for ThaiHealth is designated to come from 2% of the additional duties collected from alcoholic beverage and cigarette products. (Collection of budget according to Health Promotion Foundation Act is not done by dividing the budget from the tax earned by the government, but is from an additional sum of money collected directly from alcoholic beverage and cigarette companies. Not only it does not create additional burden for taxpayers, it also helps to reduce the number of drinkers and smokers effectively because the companies choose to adjust prices of their products up, preventing people with less income from purchasing these dangerous products.)

As for the fund management, the foundation is administered and managed by the ThaiHealth committee headed by the Prime Minister and independent specialists, experts, accompanied by representatives from concerned agencies. The committee designates rules, regulations, protocols for money-spending activities with efficiency and flexibility just like in private organisations. It is also managed with good governance with efficiency, results, and value for money in mind.

3. Results of operations and value for money of ThaiHealth projects

According to the result of operations between ThaiHealth and its accumulated network of government, private, public, and local community sectors, it has found that the health indicator ameliorated gradually as information shown below:

Occurrence of road accidents and fatalities

The gradual decrease of casualties caused by road accidents