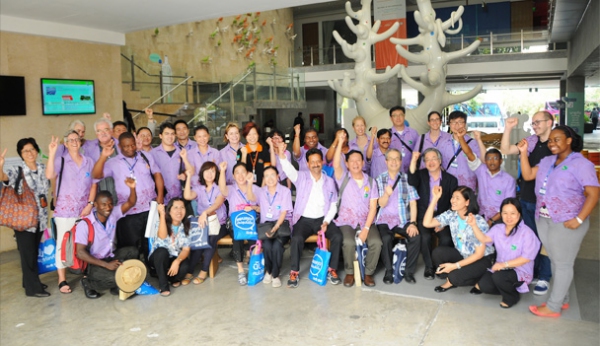 On the 28th January 2015, Thai Health Promotion Foundation (ThaiHealth) was visited by participants of Prince Mahidol Award Conference 2015, which was held from the 29th to 31st January 2015.

The Prince Mahidol Award Conference (PMAC) is an annual international conference focusing on policy-related health issues of global significance. The conference is hosted by the Prince Mahidol Award Foundation, the Thai Ministry of Public Health, Mahidol University and other global partners. It is an international policy forum that Global Health Institutes, both public and private, can co-own and use for advocacy and for seeking international perspectives on important global health issues. The Conference this year was co-hosted by the Prince Mahidol Award Conference, the World Health Organization, the World Bank, Joint United Nations Programme on HIV/AIDS, U.S. Agency for International Development, Japan International Cooperation Agency, the Rockefeller Foundation, China Medical Board, and Chatham House with the support from other key related partners. The conference’s theme this year was “Global Health Post 2015: Accelerating Equity.” Participants were among world leaders from many countries around the world.

Prior to the conference, on the 28th January, the participants were able to choose to visit one among six fields. ThaiHealth was honored to be one of the six sites, chosen to visit by 34 participants, including representatives from public agencies, international organizations, academia, from 21 countries around the globe e.g. France, the United Kingdom, China, Japan, Croatia, Korea, Myanmar, Uganda, Switzerland, etc.