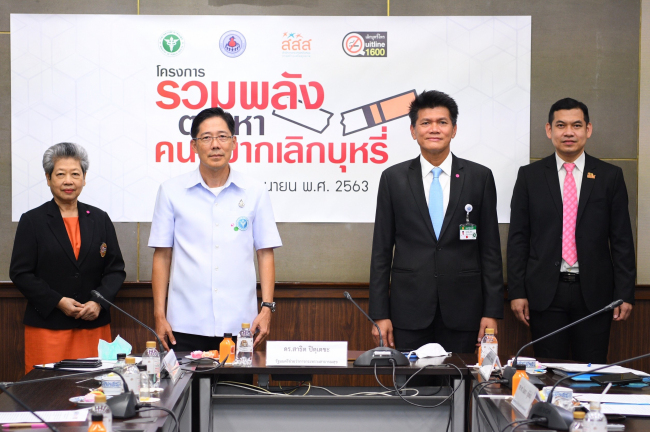 Quest to find smokers who want to quit: village public health volunteers aim at reducing risks of infection and spreading of CoVid-19 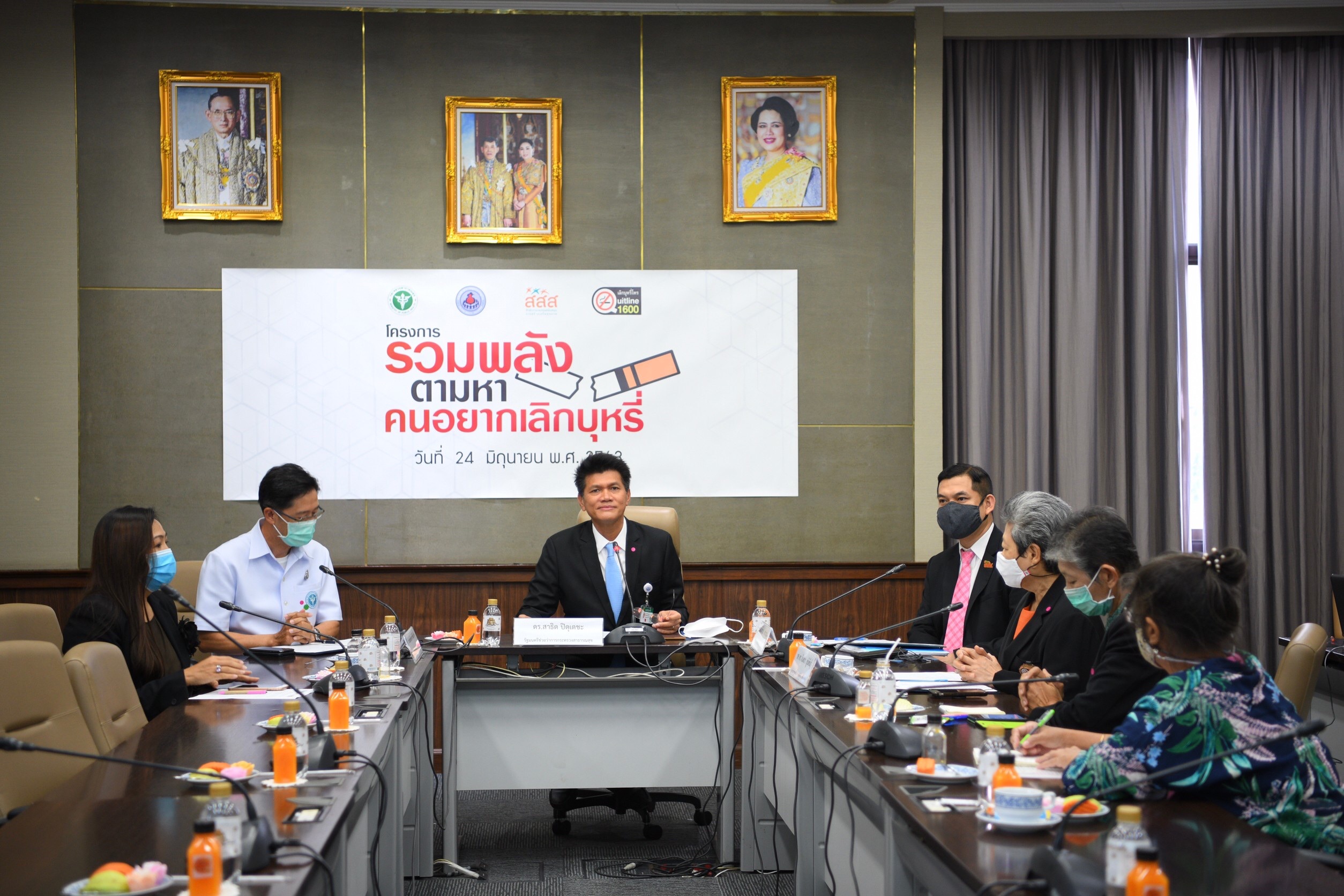 Thai Health Promotion Foundation is joining hands with Thailand Quit Line 1600 and Village Public Health Volunteers to launch a quest to find smokers who want to quit by forwarding cases to Thailand Quit Line 1600 and giving them continuous assistance until they quit successfully, while Public Health Minister praised the project as perfectly in line with the government’s policy of #เลิกสูบลดเสี่ยง or #QuitSmokingQuitRisking under an effort to curb the spread of CoVid-19 into the public.

June 24, 2020 - Thailand Quit Line 1600, in collaboration with Department of Health Service Support, Ministry of Public Health, and Thai Health Promotion Foundation, jointly organised a press conference for the launch of “Quest for I-want-to-quit Smokers” to raise awareness of the importance of quitting smoking among the general public during the ongoing period of CoVid-19 outbreak.

Public Health Deputy Minister Dr Sathit Pitutecha, said that even though the overall situation of the outbreak has subsided to some extent, it is necessary to sustainably keep a close watch for people’s health. He therefore came up with an idea to deploy village public health volunteers in villages to collect villagers’ information. And in order to maximise their abilities of the village public health volunteers, the Public Health Ministry collaborated with Thailand Quit Line 1600 in the campaign to help smokers stop smoking during the CoVid-19 period. The project will aim at raising awareness of the danger of tobacco and urging people to stop smoking as it is the cause of poison addiction, various illnesses, and it is also a factor that helps spreading the virus into the public. 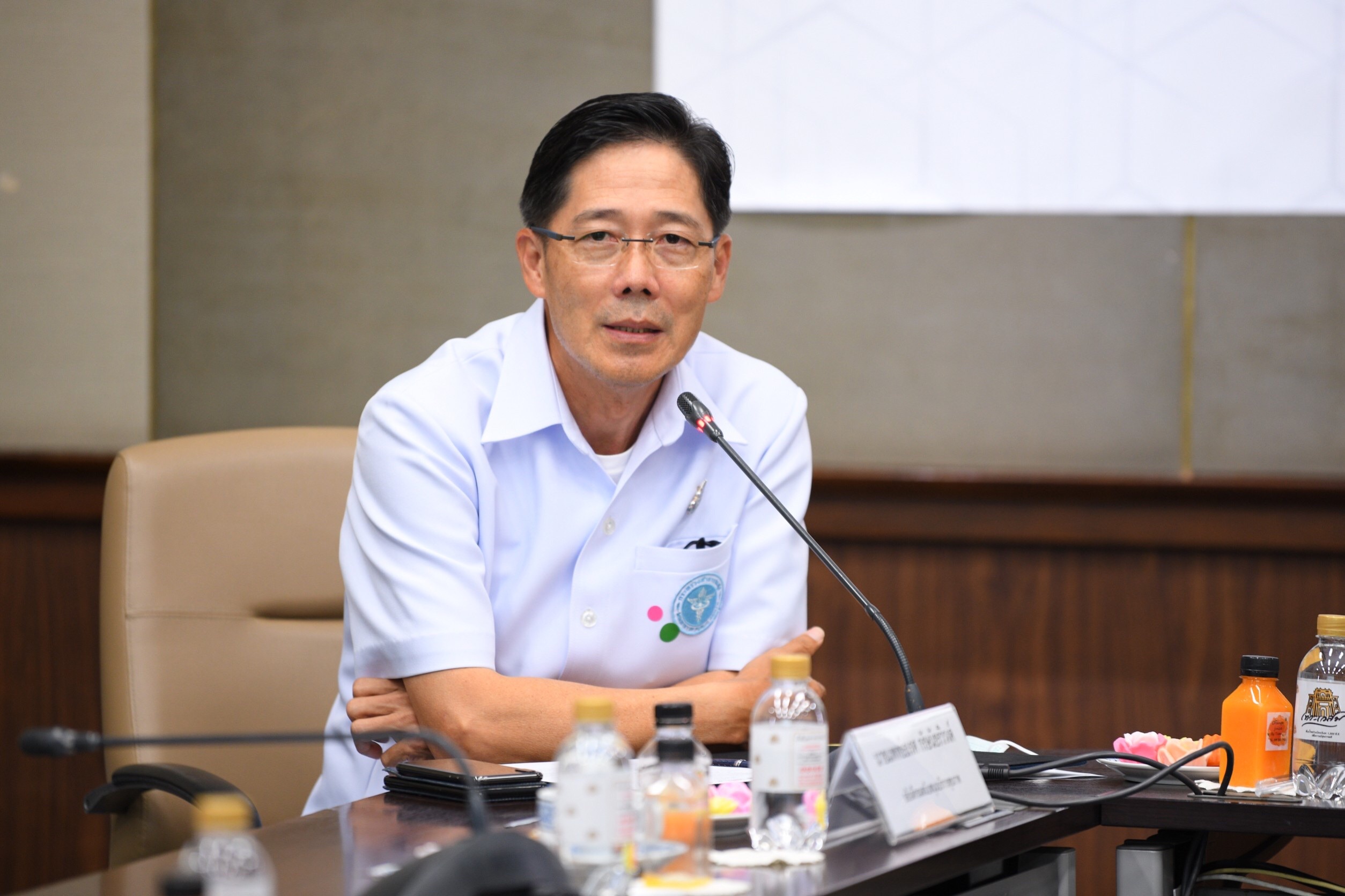 Dr Thares Krasnairawiwong, Director General of the Department of Health Service Support, Ministry of Public Health, said that the ministry has been equally active on a campaign to urge 3 million people to stop smoking within 3 years. The campaign was then readjusted and improved with more support from Thailand Quit Line 1600 and Thai Health Promotion Foundation. The new partners will provide advice for smokers who want to quit smoking. The campaign is also in line with the New Normal that involves physical distancing as implemented on SMART OrSorMor, and U-Refer mobile applications with kind compliance from mobile phone operators. This is considered an integrative project that combines strength, resources, technology, multidisciplinary manpower, and unique capabilities of each organisation. As a result, the Health Service Support Department and village public health volunteers nationwide will help smokers in countless communities in Thailand to enter high-quality quit-smoking processes for the sake of good health among themselves, their families, and their smoke-free communities. 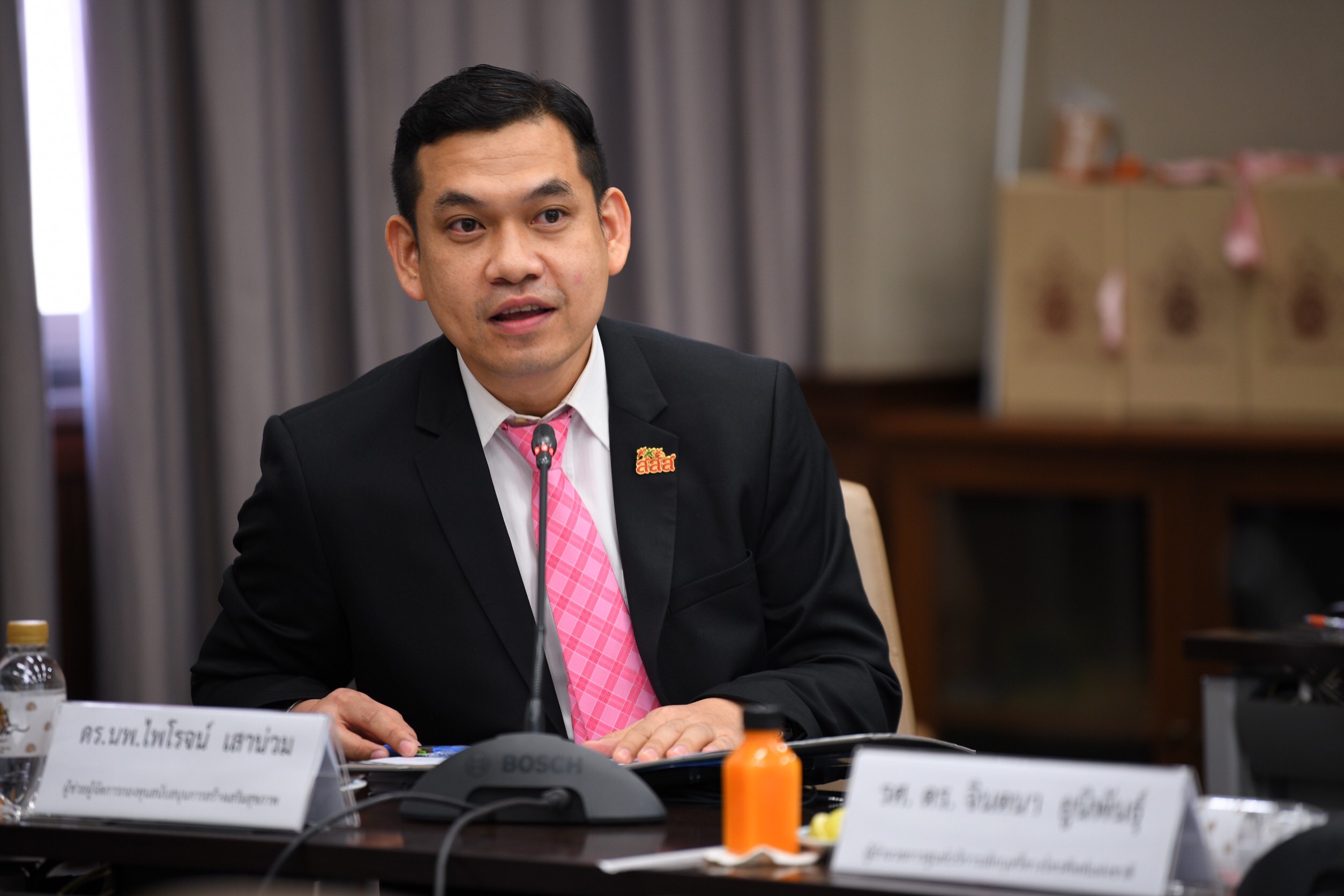 ThaiHealth Deputy CEO Dr Pairoj Saonuam said that ThaiHealth, through its tobacco control masterplan, is aiming at achieving the national tobacco control strategy by collaborating with its 20-strong partner agencies led by the Ministry of Public Health. This coalition is striving to create linkages among various relevant strategic partners in supporting and pushing tobacco control measures with a mutual goal of protecting Thai people from the danger of tobacco abuse, saying it was now time for Thai people to turn their back against smoking.

A study conducted by Tobacco Control Research and Knowledge Management Centre (TRC) in 2017 indicated that as many as 72,656 Thai people died of smoke-related diseases – 18 years sooner than the expected life expectancy and rendered disabled in their last 3 breathing years. Another /data from Health Security Fund, Social Security Fund, and Government Official Welfare in 2017 found that cigarette is the main cause of hospitalisation for as many as 580,794 Thai people.

“Smoking is also the cause of a large-scale economic deficit. As indicated by the National Statistical Office of Thailand in 2017, Thailand suffered a deficit of 87.25 billion baht or 0.56% of the Gross Domestic Product or 15% of the nation’s total health budget. The deficit is classified into 77.173 billion baht in the lost productivity caused by premature deaths, and 8.891 billion baht in the cost of medical treatment for cigarette-related diseases,” Dr Phairoj said. 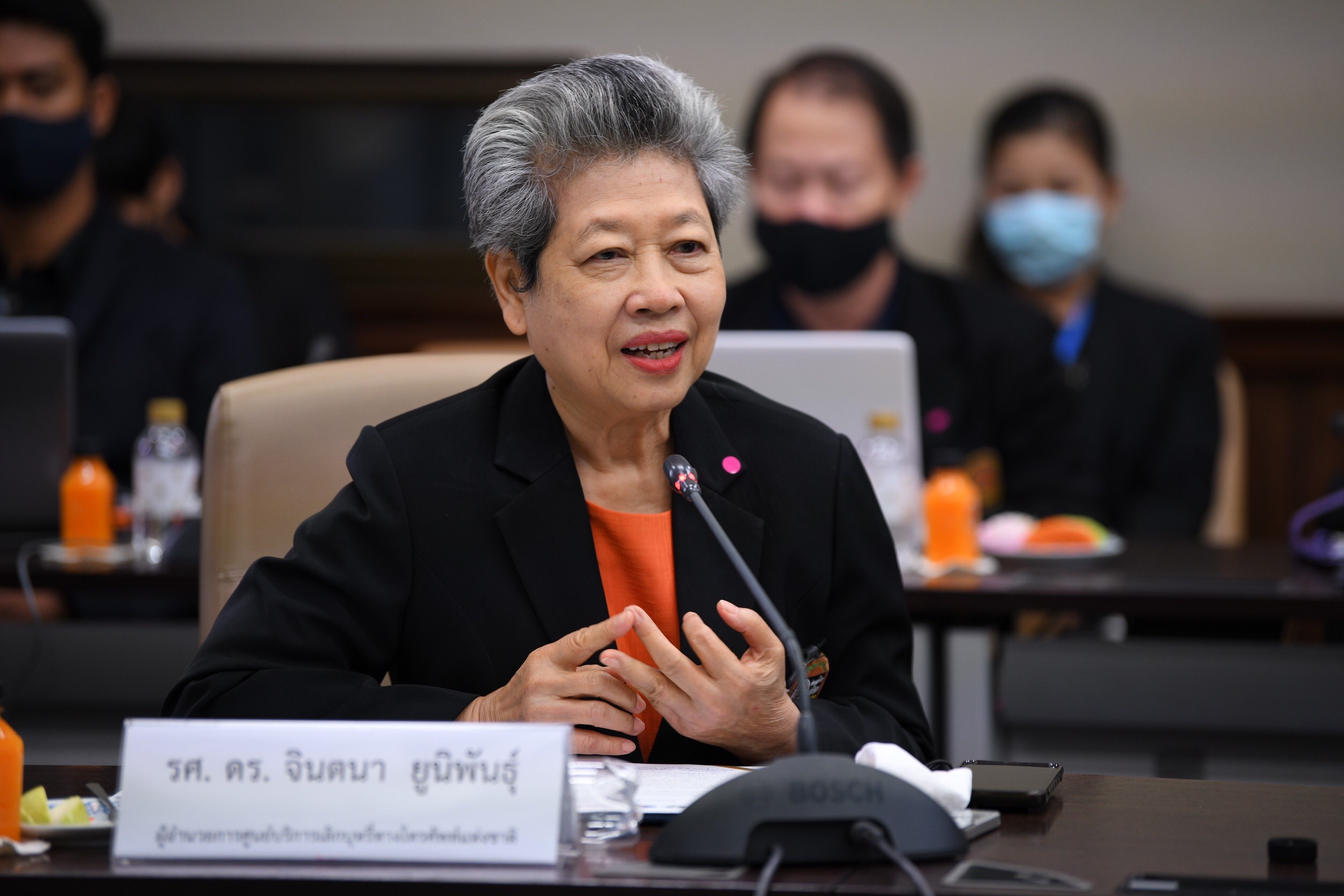 Director of Thailand Quit Line 1600, Assoc Prof Jintana Yuniphan, said that people need to stop smoking especially in this period of CoVid-19 outbreak as smoking can lead to easier infection and death by CoVid-19. Therefore, Thailand Quit Line 1600 is now ready in terms of the number of call centre staff, instructions, and technology that will simplify village public health volunteers deployed nationwide to conduct effective field work – as the inspiration for quitting smoking begins from within ourselves. From more than a decade of experience, only 5% of smokers succeeded in quitting smoking without receiving any external assistance. On the other hand, as many as 32% of smokers who wanted to quit reportedly succeeded, with the help of Thailand Quit Line 1600 as their company in trying to quit smoking, thanks to its innovative instructions, advice, morale-boosting techniques, additional technological novelties in helping people quit smoking, and real-time working culture that has become a role model for similar quit-smoking hotlines abroad.

In addition, it has been confirmed in many international congresses on helping people quit smoking that the success comes from close working partnership between people, public health staff, and community leaders, as stated in the 2nd revision of national tobacco control strategy masterplan.