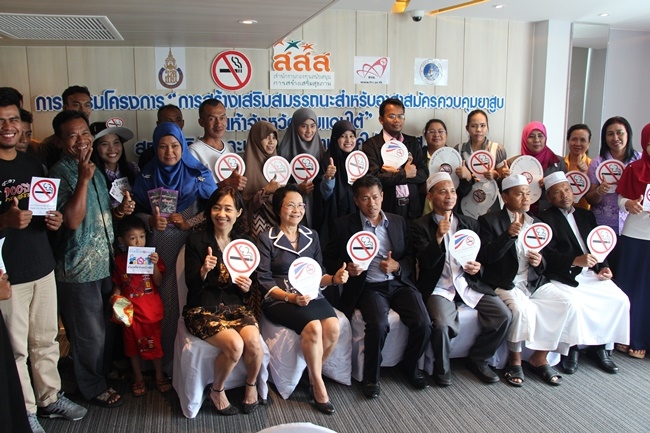 Tobacco Control in the Style of “Pattani Model”

ThaiHealth has expressed support to its “Tobacco-free Province” project, aiming at reducing the rate of cigarette consumption, and preventing new smokers in Thailand.

In the past 10 years, ThaiHealth has been active in supporting the tobacco control policy operated by the Health Risk Control II Section. The specific goal of this plan is to reduce the tobacco consumption rate in Thailand in 2014 by down 10% since 2009. In order to achieve the target, ThaiHealth has been continuously organising “Tobacco-free province” project since 2014 on the basis of information collected by the National Statistical Office in smoking and drinking behaviour of the Thai population in 2014, to find the starting ground while aiming at expanding the operations into all regions of the country. The research starts at reaching the target group by focusing areas suitable for the national tobacco control strategies. The involvement of all sectors of the community and corporate goals are needed using social capital based on the context of each area to reduce smoking rate of population in the province to drop to the target goals.

The Southern province of Pattani has been in the programme since 2014. At the beginning, ThaiHealth provided support aiming to create tobacco control at the provincial level and pursue strategic plan for the national tobacco control strategies. Later on, they received support in the projects called “Smoke-free community of Pattani” focusing on tobacco control in cultural context and the participation of the community to encourage all sectors to take action to protect public health and reduce smoking rates, create smoking free zones according to the law, prevent new smokers from emerging and encourage them to cut down on smoking or quit it completely.

In order to effectively operate in the area, they have appointed a subcommittee on alcohol and tobacco control in the district level by having District Chiefs as president of subcommittees, Chief of Provincial Police as vice-president of the subcommittee, and other health related officer as secretary. This committee has the authority to set guidelines of monitoring to prevent youth from getting involved in alcohol and tobacco. The committee also conducts evaluation and co-ordinating with law enforcement, as well as performs other tasks assigned by the committee, and later report such activities to the committee regularly. This move will forge tighter collaboration between different sectors, and that tobacco control can be driven simultaneously on both the provincial and district levels.

In addition to the collaboration between all sectors, from both at the provincial and district levels. Another main focus in this area is the “religious leaders” because 86.25% of population in Pattani are muslims. In order to proceed with tobacco control strategies, the committee is obliged to organise “Health Promotion in Religious Places in Pattani” workshop for religious leaders and educate them about danger of cigarettes. Aiming at promoting and developing potential of religious leaders to be leaders in driving the tobacco control community level effectively, the workshop was participated by 430 participants.

Highlights of implementation of tobacco control in Pattani are proactive, focusing on working with the local and the connection with all sectors related to tobacco control at both the provincial and district level community. Especially driven by religious leaders and activities within the community, making the work of tobacco control in the context of the target community, and more. For example, by inserting religious beliefs into people in the community to stop smoking. 302 people participated in the program and 26.49% or 80 participants could quit smoking. 33.44% or 101 people said they were smoking less. 54 people joining the “Reduce, Avoid, and Quit” program. Among them, 37.03% or 20 participants could quit smoking completely while 46.29% or 25 people could reduce the amount of cigarettes they smoked per day.

Results from the implementation of tobacco control through the systems of operating with district and community level, by emphasis on collaboration from all sectors as well as the ongoing involvement with the community. This make Public health office of Pattani received “Tobacco Prevention Network 2012 Award" from the Office of Disease Prevention and Control 12th, also receive the award from Princess Soamsawali for "Performed exceptionally well planned strategy follow the National Tobacco Control in 2012-2014 “which consider a great honour to everyone in Pattani.